‘Bio’ from the beginning…

There were two determining factors responsible for the fact that Farthofer had great success from the very beginning: for one thing, the uncompromising focus upon quality; for another the exclusive use of organic fruits and organic grains. The label ‘Bio’ quickly became the most important unique selling proposition of the Farthofer spirits, our distinguishing characteristic, with which Josef separated himself from the competition.

We are a member enterprise of Bio Austria and Biokreis, and have been inspected and certified by Austria Bio Garantie since 2003.

We did not arrive at our line of organic products out of marketing considerations. Rather, it was the logical continuation of Josef’s early interests. Because, already during his student years he had become involved with conservation and with nature, and has for many years been a member of the World Wide Fund for Nature, as well as belonging to the Austrian Conservation Union; even his graduate thesis was concerned with the subject of sustainability. Working together with the World Wide Fund and the state of Oberösterreich, Farthofer initiated a conservation project on his property in the lower Mühlviertel region in 1997.

There, various meadow-breeding fowl such as the corncrake, the whinchat and the red-backed shrike have settled in. The condition of the colonies is evaluated via annual monitoring by ornithologists of the WWF, and the project is designed to maintain a long-term reserve for these birds.

According to the current inspection of our twelve-hectare nature preserve in September 2017, conducted by independent ecologists from the state of Oberösterreich and from the Steiermark, the presence of various rare species of animal and plant life noted on the EU’s ‘Red List’ has been confirmed. Species found there include the sand lizard (Lacerta agilis), a cricket known as the wart-biter (Decticus verrucivorus) and rare plant varieties such as St John’s wort, (Hypericum sp.), wild basil (Clinopodium vulgare), wild thyme (Thymus sp.) and bloodwort (Potentilla errecta).

This tract of land is also home to our drinking water spring, where we obtain the crystal clear Urgestein-water for our noble spirits.

But the organic principle doesn’t stop with the raw materials. In every other facet of our work, recyclable materials are utilised to the greatest degree possible. One unique aspect is our organic heating with the elephant grass ‘miscanthus’, planted on our own fields. Exhaust heat is stored in the community energy net and supplies, among other buildings, the school and the kindergarten. Of course we utilise green electricity. A photovoltaic power system was installed on our foursquare farmstead, just a few kilometres distant from the distillery. Incidentally, Josef Farthofer was nominated for the national Climate Protection prize in 2008 for this project.

We operate a closed organic circulation system. The stillage collected from our processed grain and fruit serve as high-quality fertilisers. We add effective microorganisms to our stillage, which increase the benefit of the fertiliser. The fertilisers are applied to our fields, where we cultivate our rare types of grain. Grain stillage and beer lees serve as energy-rich animal feed for organic farmer friends of ours. Pressed fruit residue, known as ‘fruit cake’ will be further used in the production of liqueurs and fruit-based spirits. The pits remaining from the stone fruit are used to ignite our wood-chip heating system, and the ashes from it ultimately return to the fields, to support the growth of our splendid fruit trees.

In 2016, our sustainable methods of operation earned us the Sustainability Award from trade magazine ‘The Drinks Business’. 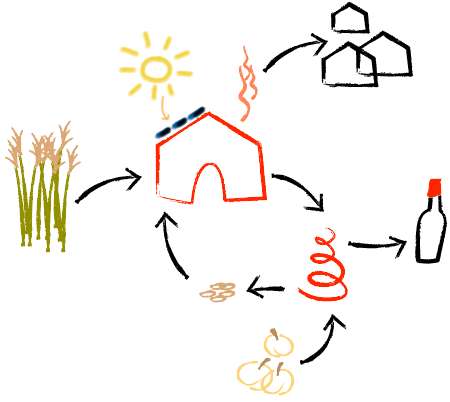 Josef’s father is a native of the Mühlviertel, where years ago he discovered a spring on his ancestral home and developed it. The primordial rock – Urgestein – through which our spring water flows is composed of granite. The stone is part of the granite and gneiss highlands, one of the five large geologic systems that make up the Bohemian Massif. The greater portion of the Bohemian Massif in Austria was formed some 350–400 million years ago, and is made up of crystaline rock, primarily of granites and gneisses.

This spring water is very low in limestone content, and with its extremely ‘soft’ character makes our noble brandies and spirits a particularly pleasurable drinking experience. The extremely soft water of this spring is today the basis for all of our distillates – and one more secret behind their distinctive quality.

Our spring is located in a nature preserve, where it offers an environment for a multitude of flora and fauna. We are quite proud to be able to protect these – some quite rare – plants and animals.